In a 2010 article titled "Emil Alzamora's Sleek Metaphors," Benjamin Sutton says these sculptures "are like numerous cautionary anecdotes encapsulated in one human figure, however deformed."

The author remarks Alzamora’s “uncanny aesthetic” as “a fusion of classical sculpture and Surrealism, with occasional shades of Minimalism and Expressionism,” and that “each bust, body and hybrid organism has a striking presence and tangible mass. Most forms are creepily, intentionally lifeless, calling to mind ancient Greek sculptures, but also the imposing, enigmatic object-hood of a Robert Smithson installation. Other works still bare traces of the artist’s hand, calling to mind the stretched-out bodies of Alberto Giacometti.” (Benjamin Sutton, Emil Alzamora’s Sleek Metaphors) Mention of the “primordial chasm between body and mind” and the visual commentaries on contemporary body image issues “reflecting the idea of being fundamentally estranged from one’s body” avert the viewer to the artist’s manifest intention to denature conventional representations of the human form. Lyle Rexer too thinks that in Alzamora’s sculpture, “concept meets craft at a very high level,” and sees this in contrast with “the general de-skilling of art and the rise of conceptual strategies, which have gone hand-in-hand since the early 1960s,” amounting “to an old-fashioned, Henry-Fordish division of labor” that has taken over in the art world. Rexer adds Alzamora to a list of sculptors such as Cemin, Kiki Smith, Pier Consagra, Martin Puryear, or embroidery artist Angelo Filomeno, who “demonstrate that knowledge of materials, and, more importantly, of techniques, opens doors to imagery that can’t simply be ‘conceived’ out of the cultural ether.” (Lyle Rexer, Emil Alzamora: Random Mutations That Work) The author addresses not only the artist’s “virtuosic performances,” to mark the line between fairy tale and allegory, which – as in the case of Kiki Smith – is always “in danger of veering into literalness, an art that speaks too much for itself,” but also the psychological and political character of the distortions of the human “that work only as expressions of a distorted society.”

More from this article by Sabin Bors at Anti-Utopias. 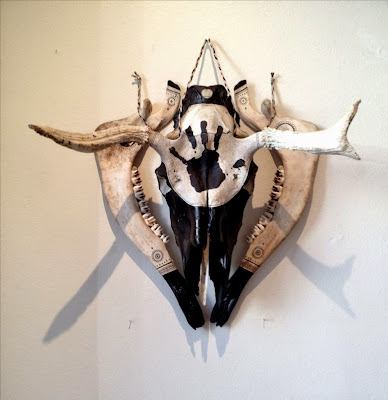 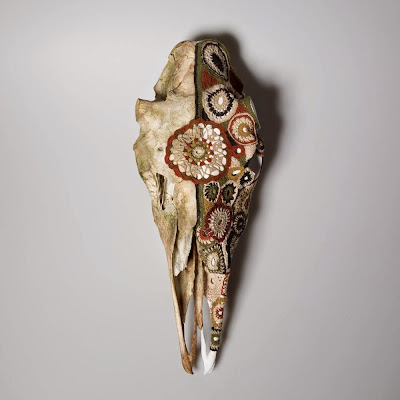 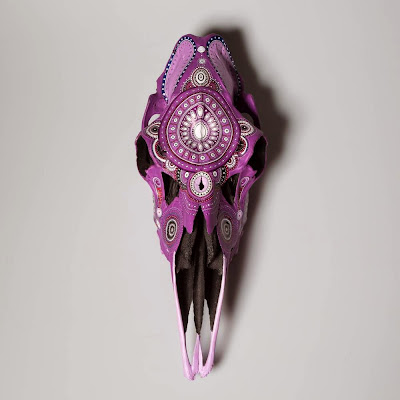 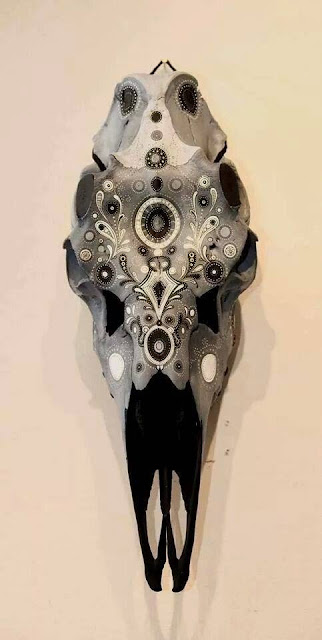 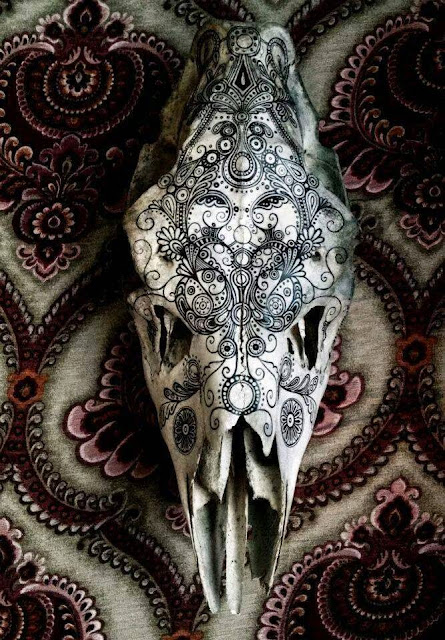 Hanna Hasse Bergström is rocking my world this week. I painted sheep skulls for quite a while but I never really got a handle on the surfaces. They are quite tricky and the areas broken up by the shapes and joins really are a difficult mistress. Give it a go if you dare. Check out Bergström's carved skulls and more of her work here.

Posted by Barry John at 07:32 No comments: Links to this post

Email ThisBlogThis!Share to TwitterShare to FacebookShare to Pinterest
Labels: Artists

It wasn't warm but it was night and boots, thick smelly jerseys, long hair and youth added degrees more efficiently than plane tickets to summer or reminiscing. There were five friends and an old green car. There was learner grade pot in my first session quantities and enough confusion and noise to occupy changing faces. There was the honorary DJ who would do the job better than any and would go on to do it for many. There was a driver whose and dedication to the cause was always taken for granted and two more, the fighter and the dreamer, who like the first two, the fifth would think of often and whisper all their surnames with a smile.

It was a Seattle autumn, the year Frances was born, or should have been, because everything seemed right and everyone must have been happy? Time was slow and the cold night wasn't cold enough for youth... The spot was a dark road behind a tin pot airport which seemed larger then and witnessed by none but a wind sock, which would, one far off night, be stolen, they talked, smoked, posed and pretended time was slow. They made grand plans and they knew the way. They were tall and strong and lying to themselves but it wasn't cold enough for youth... This was ritual and potent. That car was church and not a soul but them knew it. It would one day be sold, replaced and no doubt sold again but no friends could take that car where these friends did and no driver could be as generous. No friends could be closer and no distance they drove far enough. But they were just kids and this memory could not be older or this autumn colder.

Nights like this can only end one way. The way home. And that way has a secret and a song and the DJ knew this and selected the theme. Strange awkward peace descends, warm like a friends hug but awkward like truth. The dumbest of the five listened and showing his hand remarked to great laughter. They knew he was soft and simple. He knew it too but also that they did and was always glad about that. He never fooled anyone except himself but that night he did not. While he hoped the laughter would stop it was not from shame but because he wanted to listen and soak in this moment and them. All better, stronger, more interesting, more loved and more beautiful than he. Because he wanted to remember and because he knew time was not slow and right then knew that this was the quick. In that moment he promised himself he would remember this night and so he added it to his list. Now longer than he would ever dare dream, believe or deserve and there on the list it sits. It haunts and cries, wishes and hopes. Sits humbly proud by scars and wrinkles and lucky by crematoriums and hospitals. Blessed next to blond hair on a grandfather's birthday and a sweet mother's last breath. He'd never write this list and its many footnotes but lists like this you never have to. You can't forget wrinkles any more than you can lipstick and tears. Those lists write themselves but despite the promises to remember, lists often won't match. Well it's still there anyway, on this list. That promise to not forget can't be undone now even if it makes that dumb kid old. The lessons he knew he would learn were learnt. That time he knew would pass has passed and the names he swore he wouldn't forget are just as real and sweet and come as often as they always did. Falling out his mouth, embarrassingly easy, bitter sweet and ancient. So it's autumn here and cold and I'm at that spot and witnessed by none bar a wind sock I whisper those four names. Nights like this only end one way. I hope you found your way home.

UPB 4 EVA
Posted by Barry John at 12:09 No comments: Links to this post

Email ThisBlogThis!Share to TwitterShare to FacebookShare to Pinterest
Labels: Music, Talks with a devil

I really am going?

The sleep is poor and has no definite pattern.
Posted by Barry John at 06:39 No comments: Links to this post

After the tone, please leave a message. 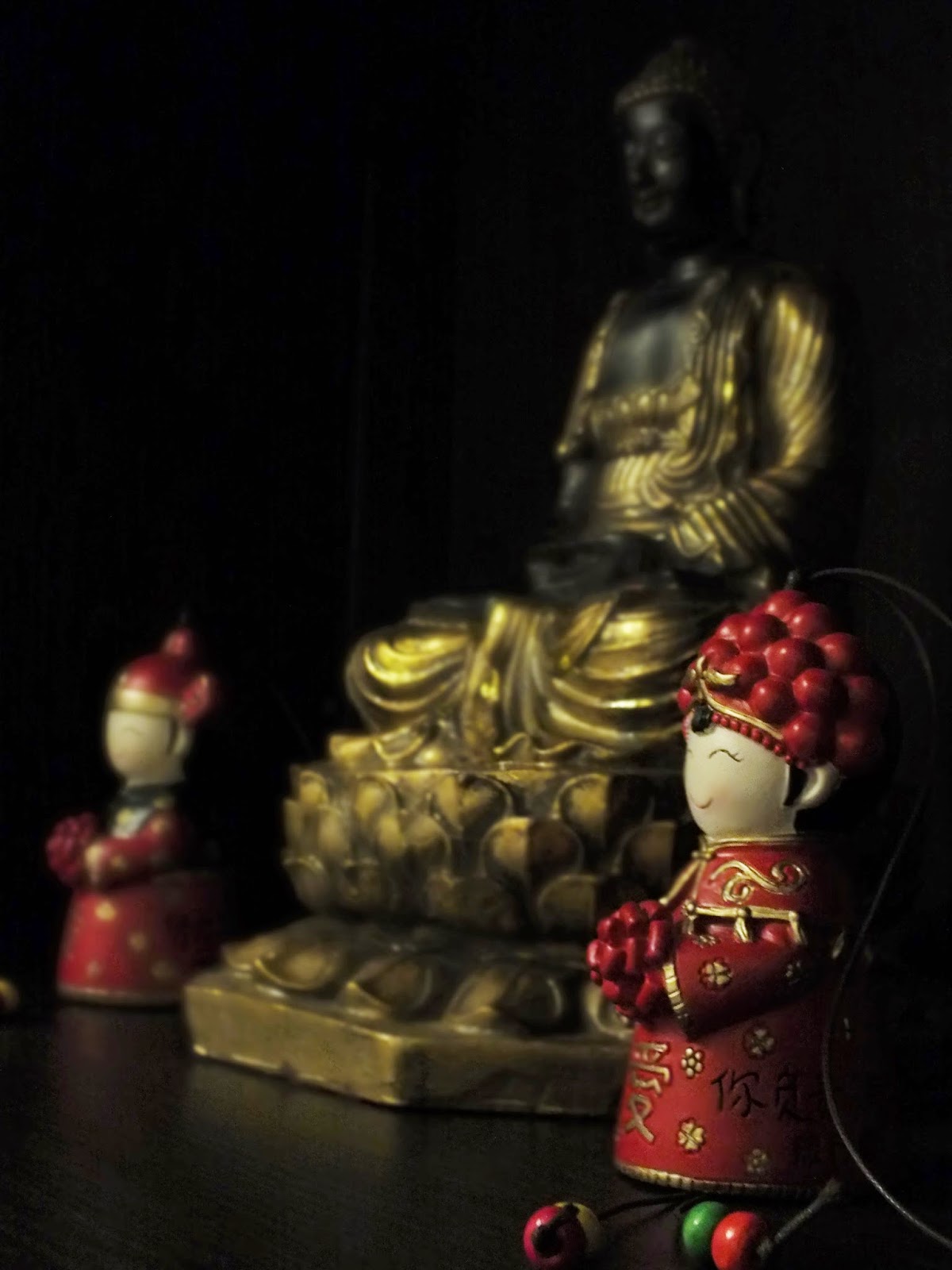 I feel a bit like a stranger here at the minute. I know ya hip to stuff. Well, stuffs a bit busy on my end and I've kinda tapped out a bit. Not like "I'm not doing any more stuff" but more like, "I've gotta cut back on stuff here and there to try and get the ends to stretch a bit closer". Well, I've trimmed here are there, I've budgeted and evaluated. I've made lists and memos and sent apologises in advance. I'm doing it right and I think good but there is a ways to go. It's not how many push ups you can do but how many you can do after it starts to hurts and that's where I'm at. A bit jelly in the arms but I'm grunting and swearing like a (K)noxious sailor and the complications are not extraordinary. Just processes, apart from a dirty wee flu, hopefully not passed on, and as processes, will be processed.

Anyway, today has been a goodun. For a reason I'll never be or deserve to be privy to, the universe has sent a few kind words. Some short catch ups, messages and well wishes. Sweet tags like butterflies and moments of serendipity, played out like Lynch on ecstasy. The timing of so many today could not be coincidence could it? Perfect like? Fresh clay. I could go on and on tonight, I'm gushing, so before a make an ass of myself, Cheers! I'm doing everything I hope you expect me to be doing and some more, there's also a healthy dose of stuff on top too. New stuff soon, old stuff still and soon more old stuff and new stuff but with more catching up.

Posted by Barry John at 14:20 No comments: Links to this post